- December 10, 2017
Here we have a nice German Grandfather/Floor clock.  It was purchased at an antique store by the customer.  Interesting story in that this customer found the clock and gave me a call for advise.  He explained what the clock looked like.  We discussed different features of the clock.  With today's technology, he sent pictures of the clock.  The clock looked like a keeper.  From the pictures, it looked like all the parts were there (and they were).  The chain was in pieces but repairable.  The face is beautiful along with the weights and pendulum.  The clock was purchased for a great price and delivered directly to my shop where I took a closer look.  The notes from the previous owner stated this is from the 1920's.  I  believe the movement is much older than that.  Given how the movement was held together, i.e. taper pins holding the movement together I believe this movement was made in the 1860's.

After a little research on this clock it was found that this clock is from the Art Nouveau era.  Art Nouveau, ornamental style of art flourished between about 1880 and 1910 throughout Europe and the United States. Art Nouveau is characterized by its use of a long, sinuous, organic line and was employed most often in architecture, interior design, jewelry and glass design, posters, and illustration.

Art Nouveau started in 1861 in England, the most industrialized country at the time, where William Morris in collaboration with other artists, created the Arts and Crafts Movement as a reaction to the mid-19th-century artistic styles. Art nouveau could be said to be the first 20th century modern style. It was the first style to stop looking backwards in history for ideas.

A unique feature of this clock is the copper face, weights, & pendulum.  The face has very unique numbers and an "insect" design.  Below are pictures of the face and weights: 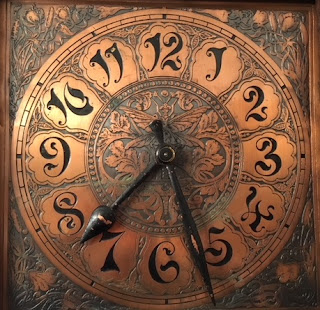 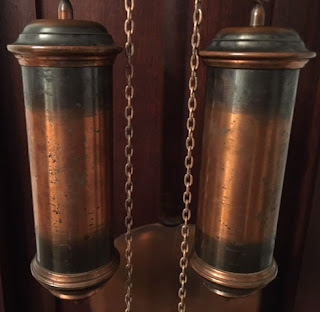 Here is a picture of the movement all torn apart.  Good thing I know how to put it all back together.  I have an unwritten rule that once I take a clock movement apart, I do all the major work during that same session.  I do not like to  keep the movement apart for any length of time.  This helps in assembly and any non-traditional non-normals are fresh in my mind so I can get it back together much easier.  There were only 28 wheels, levers, and plates to this clock when they are laid out it might look complicated.  Each piece has a unique characteristic or landmark.  Each landmark tells me what train the wheel is a part of.  I treat it like a puzzle. 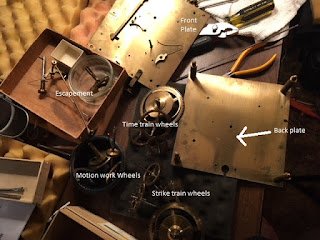 After disassembly and cleaning, the clock was put back together.  Here is a picture of both the front and back of the movement.  Notice the new taper pins. 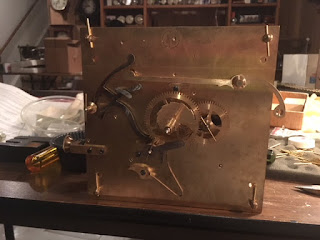 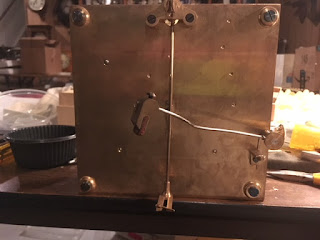 During the initial testing phase, the 1/2 strike would not activate.  After a closer look, it was found that the activation lever for the 1/2 strike was bent.  This was repaired and now the clock strikes both on the hour and half hour.  The picture below did not come out very clear.  This picture shows the bent pin.  The red arrow shows how bent over the pin was. 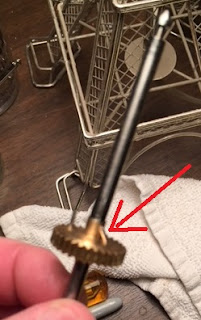 When the clock was delivered to my shop, the chain was in pieces.  Each piece had to be manually put back together.  A time consuming job but was able to complete in just a few minutes.

Here is a link to the clock ready to come home.  It really cleaned up nicely.  The video does not do justice to the sound this wonderful clock makes.  --> Click for video of Finished Product

The clock will be observed for a few days to make sure it is keeping proper time and that the clock is striking when it is suppose to.
clock repair in colorado floor clock repair grandfather clock repair