- January 08, 2018
Here we have a Carl Werner German wall clock.  Upon arrival, the clock did not run and initial observation, it has been a very long time since any service has been performed on the clock.    This is a time & strike count wheel spring movement.  A bottom finial was broken from the case and the top bonnet trim was also broken.  The suspension spring was damaged and had to be replaced.  All this work was repaired and replaced.

Here is a picture of the back of the clock movement.  Note the stamp: "Werner Deponirt" with a picture of a fox.  After some preliminary research found the movement was made between 1880 and 1900.  Werner stamped different animals to signify where the movement was made.  Carl Werner had several branches: in Innsbruck, Warsaw, Verona and French Badevel .. these animal charactors act as labels for different branches. For example, a rooster in France etc. I could not find the exact location where the "fox" was located. 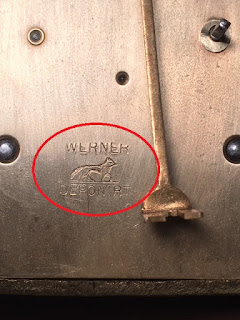 Upon disassembly it was obvious why this clock did not want to run.  There were 6 pivot holes very warn, a bad suspension spring, the mainsprings were very gimmy.

The clock movement was also very dirty.  In the picture below you can see where the arrows are pointing there is much dirt mixed with the oil. 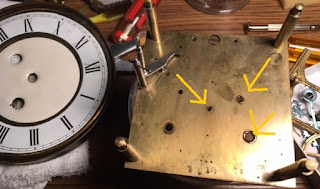 This is a minor issue but on the strike side a small taper pin is missing. 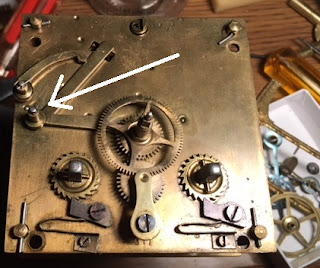 The clock then spent some time on the test stand.  During this time, the movement hammer was adjusted, put in beat, and regulated.  The face was then installed and tested again.  Here is the finished product: 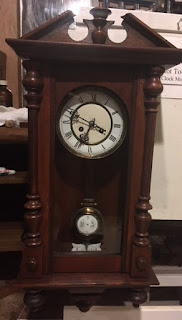 Carl Werner Factory
Originally, this watch factory was a shop for iron and colonial goods, as well as a watch packing. Carl Werner (1832-1890) married in 1861 a daughter of the entrepreneur Nock from Villingen, owner of that shop. On Carl Werner's advice, Black Forest clocks were finally made.

In 1870, watchmaking was spun out as watch factory Carl Werner. In 1887 the trademark CW was registered. After Carl Werners death in 1890, the sons Carl and Hermann took over the company management. In 1898 a second production site was built in Innsbruck / Austria, but in 1909 it was already closed again. The hallmark of this field office was "Werner Deponirt" with crescent moon and sun. In addition, branches were set up for sale in many countries.

In February 1912, a fire destroyed the company's warehouse almost completely, leaving no other option than to sell the company in 1913 to Kienzle.