- May 13, 2018
Here we have a nice Sessions time only calendar clock.  The glass has been custom stenciled for the Frontier Gallery in Fort Collins, Colorado.  The clock when received was in generally good condition, well taken care of.  Here is a picture as it came through the door and before and work was  performed: 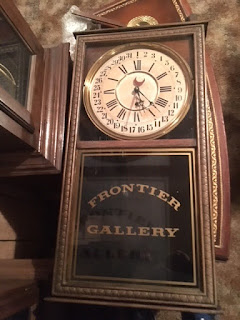 To start the repair, the clock hands and face were removed.  The movement was taken out of the case.  The case was set aside to be inspected for loose door hinges, wood cracks, etc.  The case was oiled and the glass cleaned.  This was done during the final phases of the testing of the repaired clock.

This clock has a time only movement with a separate gear set to operate the calendar.  A very simple movement.  There were 5 pivot holes that were worn and needed rebuilding.  All pivots were inspected for wear and polished. This next video is a demonstration of the warn pivot holes.

The next image is a picture of the movement with 4 of the 5 pivot holes marked.  The 5th pivot hole that needed repair was on the back side of the minute wheel arbor.  This picture was taken before work was done.  It is hard to see in this picture but 3 of the 4 pivot holes have already been repaired by a previous repairmen.  Over time these pivot holes got worn again.  The bottom-right arrow is the only hole that was not previously worked on. 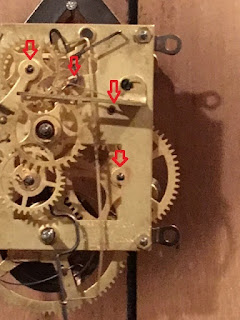 Here are two pictures of the escapement pallets.  Both were very dirty with crud.  After cleaning, those pallets came out very clean.  No futrher repairs were needed.

This repair was very routine.  The repair went like "ClockWork".

The next picture shows the movement running  outside the case on the wall. This phase lasts about 24 hours.  When the clock is running as designed and no other adjustments are needed.  The movement is oiled. 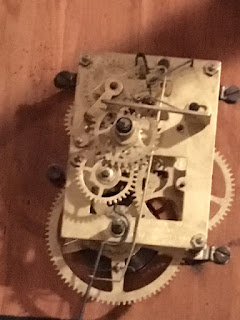 Here is a short video of the clock running on the wall. 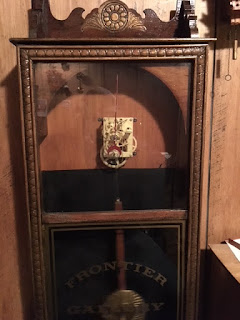 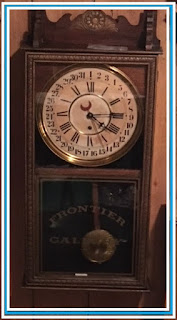 For all you clock historians, here is a short history of the Sessions Clock Company:

At the turn-of-the 20th century, the E. N. Welch clock making firm was struggling. They used a local foundry to produce their castings. The foundry owner's son, William E. Sessions, took an interest in horology and, along with other Sessions family members, bought controlling interest in the E. N. Welch Company.  The factory location was in Forestville, CT.

In 1903 the firm’s name was changed and the Sessions Clock Company was organized. Under William's management the firm produced all components of their line of clocks, including movements, cases, dials, artwork and castings.

Sessions realized that the future of clock making was moving to electricity so, in 1930, the company expanded to produce electric clocks, timers for radios, televisions and other devices. They also continued to manufacture traditional brass mechanical movements.

In 1956, Sessions was absorbed by a company interested primarily in their timing devices. Kept as the Sessions Company, the new owners ran the firm until 1969, when a decline in business forced its liquidation.