The Seikosha company first started making clocks in 1892.  The quality of these clocks ranked comparable to the American clock industry of that era.  Most people know the Seiko brand as a maker of watches.  They started out manufacturing clocks.  Here is a little history of the Seikosha company

And now for the explanation of the repair.  Here is a picture of the clock upon arrival. 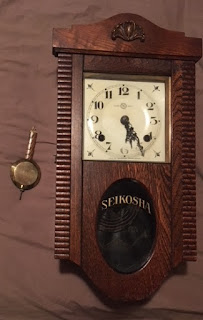 And a closeup of the clock face.  The logo on the face is the same logo stamped on the movement. 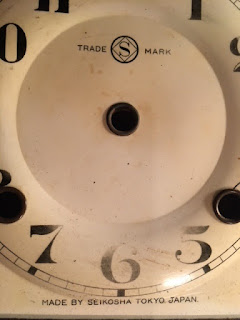 As stated, the movement is similar in quality as many of the American brands.  The customer stated that it is his favorite clock and an unbelievable timekeeper.  It has ran for years without any service.

Upon removal of the hands and face, the movement is exposed.  It was dirty and oily.  Notice the rusted chime gong.  The gong was cleaned using steal wool. 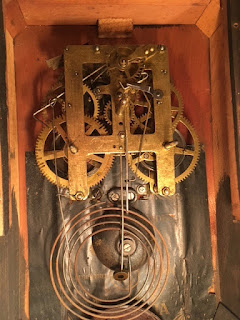 When I see a movement that is very dirty and oily I suspect significant wear.  This was not an exception.  Interesting that the clock still ran with all the wear.  Here is a short video of the examination of the wear.

Also of note  the amount of rust on the gong.  The gong was removed from the case.  The rust was then removed. It looks much better. 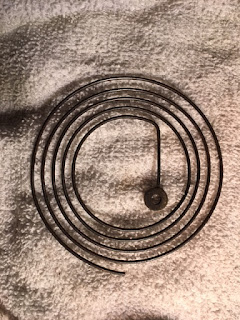 Below is a picture of the time side pivot holes.  As pointed out via the arrows, a previous repairman noticed the wear in the pivot holes but instead of rebuilding the movement the repairman chose to repair the oblong holes by crowding the metal using a punch. 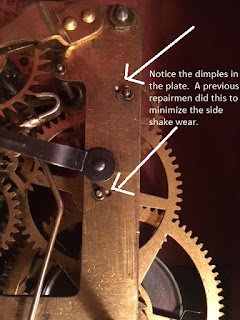 The  large S with a triangle and circle around it is the manufacture logo for the Seikosha company.  The Antique Horology website confirms  this manufacturer. 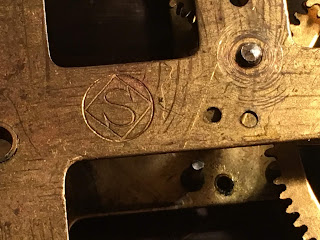 Here is a screen grab of the results of the search:

Just to give an idea of how dirty the movement was, here is a picture of the movement in pieces.  The brass is dark.  Taking a closer look at the lantern pinions and pivots, you can see all the dirty oil and grime. I have marked the plates with red magic marker to highlight the pivot holes that need rebuilding.  The picture was taken just before  the mainsprings were  removed  from clamps.  These clamps are used to secure the mainsprings for disassembly. 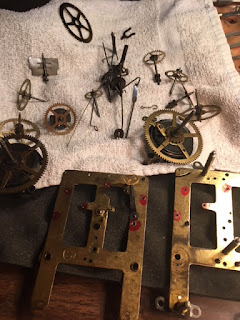 The clock needed 13 bushings, pivots where examined for roughness and polished, winding clicks were tested along with the mainsprings.  All were very good, especially for the clock's age.  Modern mainsprings and movements tend to wear much faster.  This is due to the quality of the metals used to manufacture the movement.

When all the work has been completed.  The movement is given a thorough cleaning in hi-grade clock cleaning solution in an ultrasonic cleaner.  The pivot holes were again cleaned with pegwood to remove any fine particles.

Here is a picture of the movement back together. 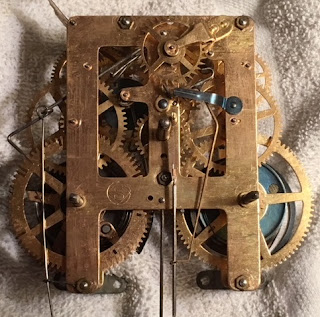 This clock is about 100 years young.  It is hard to tell it is that old.

Here is a short video of the clock running on the test stand.  I have demonstrated the count wheel mechanism along with the "Recoil" escapement action.

When all the adjustments are completed, the clock was then oiled and tested again.  After the movement passed the 2nd test cycle, the movement was placed back into the case.  The clock case is leveled and the clock is then put "In beat".  This means the tick tocks are even, the power is being released from the movement in a evenly rate.

The next step is to install the face and hands.  The clock is tested again.  This time, for speed.  If the clocks runs too fast, the regulation nut is loosened thereby making the pendulum longer.  If the clock is running too slow, the nut is tightened to make the clock run faster.  This process could take a few days. 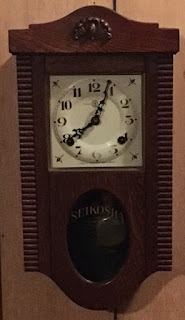