- September 26, 2018
In for repair is a Seth Thomas 89 movement.  Follow this link for a general history of the Seth Thomas Clock Company.  To properly repair this movement requires specialized tools to disassemble, repair bushings, polish pivots, and in this case rebuild a complete pivot.  More on this later.

Here is the movement as it was received: 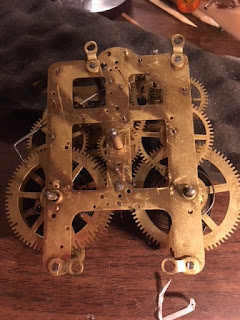 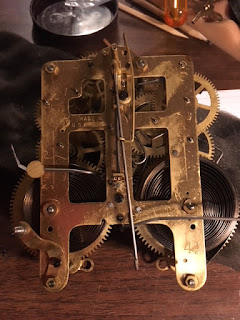 Notice the bell and strike hammer are missing

The mainsprings were clamped so the power is taken off the gearing.  This is done for easy disassemble and to accurately ascertain the condition of the pivot holes.

Here is a short video showing how much wear was in the pivot holes .

These next two images are again the front and back of the movement.  There are 14 pivot holes that were sloppy and egg shaped that are in need of repair (bushings).  The holes have been marked with a RED marker. 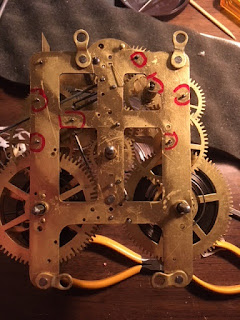 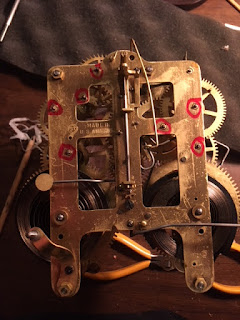 Diagnosing a repair with the movement together shows almost everything that could be wrong with the clock.  Every once in a while, a discovery is made that is not expected.  Here is the time side 3rd wheel pivot.  Not good!  Notice the significant wear on the pivot.  This cannot be burnished down.  There would not be enough material to properly secure the wheel between the plates. The pivot had to be removed and a new pivot rebuilt. 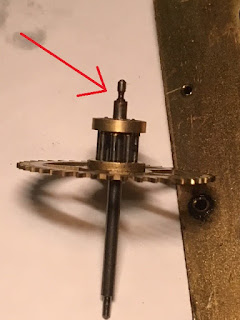 The following images  are the steps to re build this pivot.

Here the wheel is chucked in a Sherline lathe. 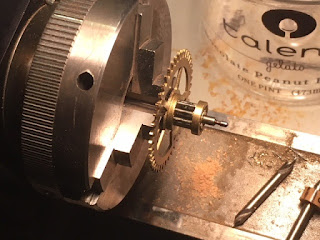 The next step is to face-off or cut the bad pivot off.  The face-off tool is used to cut the pivot off.  It is shown in this picture. It is very important not to shorten the arbor length. 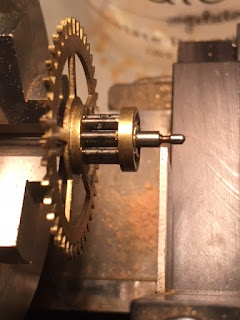 The pivot is removed.  Looking closer in the next image there is a little stub of a pivot. 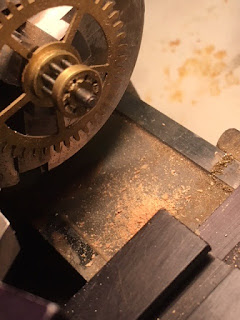 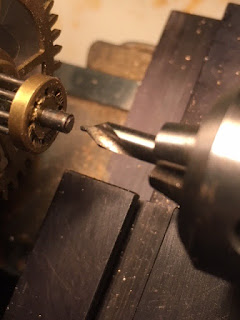 After the center is found.  A drill is used to drill the pilot hole for the new pivot.  The hole is drilled the same depth as the pivot. 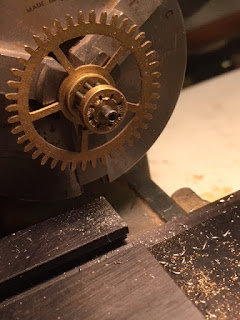 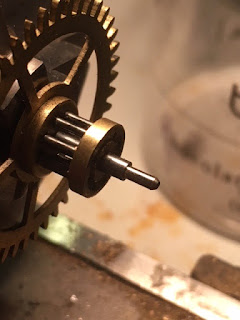 Here is another image of the wheel.  Can you tell which pivot was fabricated? 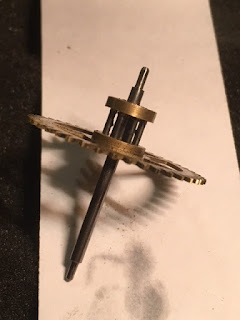 It might look nice but the final test is to see how it spins between the plates.  Here is a video demonstrating the success. 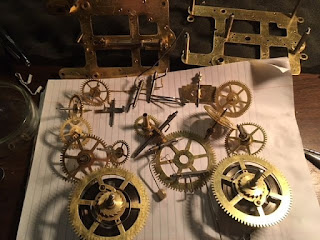 The strike train was adjusted, the springs attached, and the movement oiled.  The movement was oiled with hi-grade clock oil and the mainsprings were oiled with  hi-grade synthetic oil..  The movement is ready to go back to its owner.  There is no other testing that can be done at this time.  Usually the case is oiled , glass cleaned, installed in case and regulated i.e. adjusted the clock speed.  The strike hammer is also adjusted to get the best quality tone.