Let's start off with a short video of the old dirt and oil along with pivot wear of the back plate of the movement.  As you can see from this video the back chime and strike mechanisms have been removed.  This enabled a better look at the pivot hole wear and provided a better glimpse of the wear damage.  Check out the upper left arbor of this video.  Old dirty oil is oozing out of the pivot hole.  Notice all the pivot holes (15) that were worn were marked with a circle.  The movement was completely disassembled. All the wheel pivots were polished to make sure they were nice and smooth.

The next video shows the smooth spinning of the escape wheel after rebuilding the pivot holes both upper and lower.  Another demonstration video showing one of the lower wheels.  This is the 2nd wheel of the strike train.  The pivot hole is very loose.  This is depicted by the angle that the wheel can be rocked. Also note all the oled dirty oil at the base of the wheel.

The worn pivot holes were rebuilt.  There were 15 total.

Here is an image of all the wheels and levers placed in the clock before the top plate was installed. 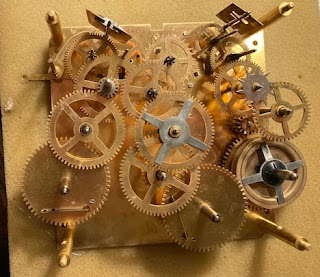 A significant amount of testing is always done.  At this point, the time train was assembled and tested.  Here is a short video of just the time train ticking away.

During the removal of the clock movement in Golden the chime hammers were tested.  The chime mechanism was very sticky.  Remember this portion of the video?  The first chime hammer was very sticky and would not fall freely.  This is caused by oiling the hammer mechanism.  As time passes, the oil because sticky needed a complete ultrasonic cleaning.  I do not lubricate this portion of the clock. 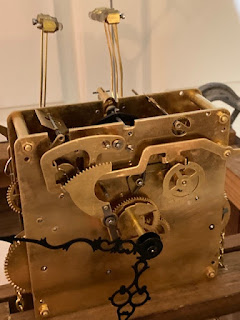 Here is a short video of the mechanism in action
There is alway interesting finds when overhauling a clock movement.
At one time two chain ends became missing.  They were replaced with two others.  The replacement chain ends are not of the style usually found in grandfather clocks.  They are usually found on cuckoo clocks.  They did work.  Sleuthing the bottom of the case was found one of the chain ends.  The other was missing.  Fortunately a replacement was found.
The replaced ends are to the right. 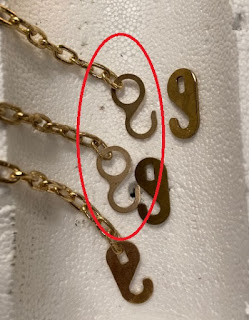