There are many KlockKit grandfather clock kits purchased and built during the 1980's and 90's.  After 30-40 years of service, these clocks are in need of some TLC.  Here is an example of a grandfather clock with a circa 1982 Hermle movement.  The customer stated the clock was running faster and faster and stopped periodically.  The pendulum amplitude was not very good.  The sound of the clock was OK but not what it use to be. 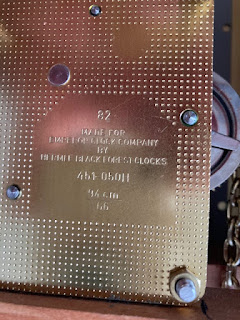 The clock was well cared for and was located in a clean relatively dust free environment.  After 38 years, there was a little grime in the pivots.  The pivot holes were very dry.  The clock was still operational even after so many years.

One of the characteristics of this kit design was the only access point is from the back.  There problem with this access is chime hammers and adjustments of the verge are very hard when the case is set against the wall.  These two images demonstrates what could happen using the brail method to adjust the verge.

Crutch fork is bent out of position.
This condition is a major power loss.
The fork should be parallel and straddle the pendulum leader.  The pendulum leader was removed and the fork was adjusted.  When completed, very little play is between the leader and the two fingers of the fork. 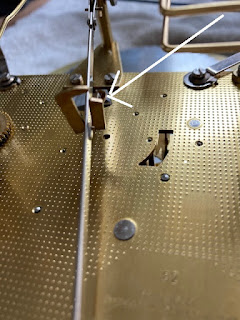 This next image displays the hook of the pendulum leader to the suspension spring.  There are two hooks that straddle the pendulum leader.  This was bent out of  position.
Again, a power loss is the result.  It was amazing that the clock could run with seeing the two issues. 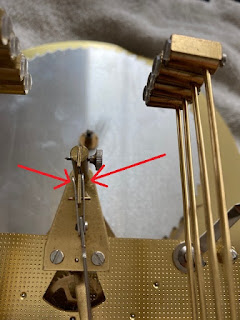 After these two items were corrected, all pivot holes oiled, a little chime hammer adjustment, the clock responded perfectly.  Even though there was some wear in the pivot holes and minor dirt in the pivot holes. Mmost of the dirt was removed by flushing the pivot hole with clock oil then sponging it out with a cotton cloth.
Upon completion of the onsite service call, the pendulum amplitude was significantly better, the chimes were crisper.  The customer very interested in his clock and watched the entire service.  Questions were asked and he learned a great deal about how the clock movement works and got a 60 minute instruction of the care and feeding of his clock.  He was very happy.